Two years after the end of the Civil War, Frank Irwin purchased a 150 acre farm on Buffalo Creek on the Anderson and Union County lines in 1867.  The farm was about mid-way between Andersonville and Loyston (now flooded) and was likely a stopping point for travelers.  Irwin and his wife, Elizabeth “Betsy” Baker, had twelve children. They lived almost entirely off the farm on which they raised livestock, grew fruit and vegetables, and feed corn and hay. Much of their produce was canned and they butchered and smoked their meat.  Francis was known for breeding stallions and introducing high quality cattle breeds. The family also kept beehives for the honey, wax, and the pollination of their orchard. Tobacco was also grown on the farm but primarily as a source of extra income to purchase items not easily produced on the farm.

John Irwin bought 150 acres from his father in 1886. He and his wife, Louisa Jane Craig, had ten children and operated the farm much as his parents had.  In 1908 several heirs owned the property with grandson Shade Inman Irwin acquiring most of the acreage. In 1935 the Tennessee Valley Authority purchased almost 30 acres in preparation for the flooding of Norris Lake which decreased the farm to its present 112 acres. When Shade Iriwn died in 1938, the farm was inherited by Walter Irwin, Lola Irwin Jolliffee, and Joe C. Irwin.

In 1983, the farm passed to Sibley Ronald Irwin, the son of Walter and Letha Maude George Irwin.  He and his wife Rosiland LaVaune Barringer have two sons.   Craig Ward Irwin is  married to Suzanne Plucker and they have  two children, Alexander Shade and Jonathan Luke.  Bryan Scott Irwin and his wife Lora Rule are the parents of  Bryan Scott II, Andrew Christian, and Cade Alden. 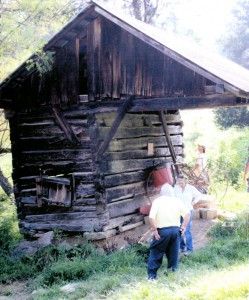 Irwin has made a number of improvements to the farm during his ownership.  He constructed a pole barn for storing round bales of hay and farm equipment and single room cabin was built for the use of the grandsons. These two structures join a complex of 19th century buildings that includes a cantilevered log corn crib and log smokehouse. The farmhouse is a fine and early example of a log cabin evolving over time to to its current Victorian appearance.  Irwin primarily ran a cow-calf operation and raised hay until 2008. He then sold his remaining cattle to J. Kern Elkins who uses the farm for his cow-calf operation. The family continues to appreciate and enjoy this land and the history of the Irwin generations who have called it home.